A PUNK ROCK NIGHT IN BUSAN

A PUNK ROCK NIGHT IN BUSAN

I first heard about a Korean punk show happening in Busan a few weeks ago from a mutual friend named Mick. There were going to be several Korean punk bands there and Mick told me he was friends with a few of the Korean punkers in a couple of the bands.
Since that point I had been following up with Mick about the concert and eventually kind of invited myself along. We got a small crew together headed to Busan to go to the show. The crew included my next door neighbor Beka (Canadian), her friend Lauren (Canadian) and Mick (Wisconsin).

We departed from the train station in Changwon and took the train into Busan.

We ended up back on Haeundae beach for a little bit and hit up some familiar eats and drinks. Most notably: Quizno’s and an American owned (from San Diego) ex-pat beach bar called Sharky’s. At Sharky’s I enjoyed a finely-crafted, and Oregon produced, Rogue Brewery IPA (heaven). We hung out at Sharky’s and watched the opening ceremony of the Olympics from about the Bond sequence to the parade of nations. We stayed until Canada and then left for the punk show.

We took a cab to the university area where the club was. This is a party section of town that is friendly to many foreigner amenities. I even saw a business selling shwarma. The mobile cocktail bar was my favorite. They essentially mix your cocktail in a large Carpri Sun-esque bag and give you a straw


We got drinks outside of the convenience  store where we met with some of the punkers Mick knew. Of them, I met Mino. Mino’s English is decent and he has a great sense of humor. Mick told me a story about how it was like 3AM and they were all wasted and going to order food and he says to Mick, “What can we order to make you fat ass fatter?” They ordered fried chicken. Mino was in a band called Stoned. We also met up with Mu, a guitarist for the Korean Irish punk band Nachopupa (I can try to describe them, but if you’re curious just watch this)

We went into the venue. It was hot. It was sweaty. Drinks were cheap. There were 6 bands. I met some foreigners. Actually I met someone from Bellingham, WA who knew someone from my high school (small world). The first 2 bands were great- including Mu’s band Stoned. Nachopupa was raucous and awesome. There were some great punk covers throughout the night:  Stoned covered “Redemption Song” (excellent punk cover), another group covered Nirvana’s “Bleed” (they tore it up!) and Nachopupa did Flogging Molly’s “Drunken Lullabies.”

After the show we went out with all the bands as one large party to a restaurant for Korean BBQ, where we ate, chatted, drank and watched Olympics swimming on TV. We must have got to the restaurant and 2AM and left around 4:30. Side note: at the restaurant I just never stopped sweating due to the heat and the punk show. This was met with a mix of fascination and pity from the Koreans. A note about Koreans: they don’t sweat (much) at all.

Then Mick, Beka, Lauren and I split a cab (about $10-12 each) back to Changwon. We got into Changwon as the sun was coming up. Mick and I went up to O’Briens for a nightcap at about 5:30AM. I went to bed around 7AM.

Yongji Lake is a manmade lake about a kilometer around. It has a nice park next to it and a nice running track around. There are lampposts around the lake that play music. I run at Yongji Lake, but haven't been recently because it has been too hot.

The city of Changwon has a mascot named Piumi. Most Korean cities have a mascot. On his head he wears a tri-colored crown because of the recent (2010) incorporation of Changwon’s neighboring cities of Masan and Jinhae as part of Changwon proper. Here is a little info on Piumi courtesy of a popular Changwon blog: Changwonderful. “Piumi is the messenger of Changwon City’s dream and hope “PIUMI” meaning “Blooming new hope of Changwon City” characterizes cherry blossoms as a cute child. Piumu a guide for realizing dreams and hope of Changwon City and a love messenger helping uniting and harmonizing its citizens”

Right next to Yongji Lake is a Korean War Memorial. There are many Korean War memorials throughout the country. This area was very much an active part of the Korean War. There was the Battle of Masan and in its darkest days for South Korea, the border of South Korean occupied territory had been pushed all the way to Busan (the green area on the map).

Also, interestingly enough Changwon is South Korea’s backup capital. Because so many factories produce weapons there’s a hidden arsenal here. The underground walkways can be used as bomb shelters. Changwon is also one of the few Korean cities that is a planned city. The roads and buildings are numbered for escape route efficiency. And also the streets were planned to be very extra wide to serve as runways if need be.

The Korean War Memorial has some old planes and tanks and a gyrocopter. 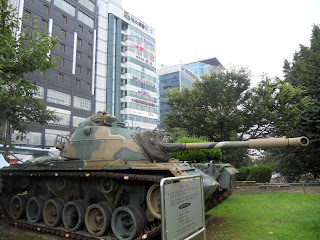 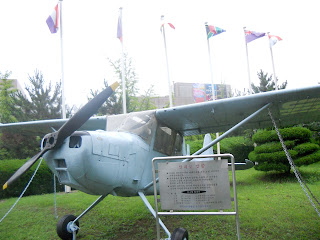 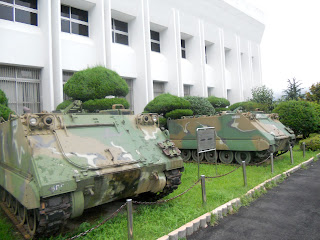 Busan is the second largest city in South Korea. Its right on the coast and luckily for me much cooler (temperature wise) than Changwon. I went with 2 friends I had made in Changwon, Lucas and Kelsey. A couple from Wisconsin/Michigan. Kelsey had a friend in  Busan so we were able to stay at their friend’s place in Busan.

We took a bus from Changwon to Busan for 3,700 won (under 5 bucks). It took about a half hour or less. Then once in Busan, we took the subway for maybe 40 minutes to Haeundae beach, which is one of the more popular beaches in Busan.

After the beach, as we were leaving we saw some street performing rappers. The Korean crowd wasn’t into it, so we gave them some support. 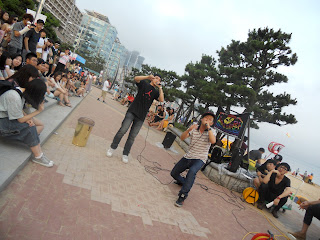 Also, there was a street festival with a dance group and maybe a crowd of 2 to 300 orderly onlookers.

For dinner we had Boodae Jigae, aka. Military Stew. This food is a hybrid Korean American food in which American soldiers, nearing the end of their rations would cut up their rations (hot dog, pepperoni) and put it in a Korean soup to make their food for further, 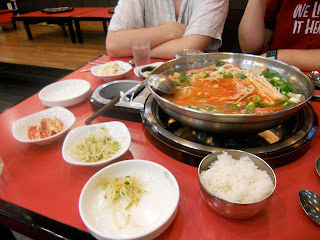 That night we met with Kelsey’s brother, a teacher at a local university and proud dog owner of a Shih tzu named Dodo, and some other familiar faces.

After a night of Norae Bang, we all stayed at Kelsey’s friend’s studio apartment. 7 people, 1 cat and 1 dog. 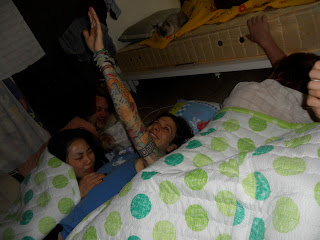 The next morning we went to a Mexican restaurant near the beach. They do margaritas, nachos, burritos, tacos, all of it (very rare in Korea). I got a chicken burrito. It was missing beans and rice, but it was just what I needed.

Luckily Kelsey’s brother has a car so he was able to drive us to a subway station. I sat in the back area of the car because we had a crew of 7.