Jamsil Sports Complex is home to many arenas and stadiums in Seoul, notably the stadium from the 1988 Seoul Olympic Games. The stadium is mostly used for big concerts now. The day I went to this game there was a big EDM (Electronic Dance Music) festival happening there featuring such big name acts as Steve Aoki, Duck Sauce and Tiesto. Eminem just played there today actually.

The baseball stadium I went to neighbors that stadium.

The instant I got off the subway it was crazy busy with excitement. I bought my Thundersticks in the subway and headed up the stadium.

It was a very exciting and busy atmosphere with all sorts of vendors selling all sorts of things. Flattened, dried and spiced fishmeal jerky; squid jerky; uncooked octopus tentacles, gim-bap (which is Korean sushi with ham, egg, and pickled radish and carrot) and hard boiled eggs. Oh and lots of beer and soju, that you are allowed to bring into the stadium.

I bought my ticket for about $8.50 USD and made my way up the ramp. It was very hot and very crowded. On this day I had packed 3 sets of clothes for fear of sweating through my clothes. Turns out I needed all three sets. Again it was very humid and close to 100˚.

I tried to find my seat, but couldn’t make sense of my ticket so I sat wherever I wanted and nobody said anything to me. At first I was unknowingly sitting in the opposing teams section. In Korean baseball they split the stadium in half. One side is for the away team’s fans, the other is for the home teams fans. 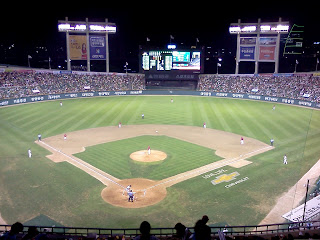 Another thing about Korean baseball is their teams are named after the company that sponsors them, not the city that they are from. I saw the KIA Tigers play the hometown Doosan Bears. Seoul has 3 teams, two of which share this stadium. The LG Twins are like the Mets and the Doosan Bears are like the Yankees.

The game itself was a different kind of baseball. Base stealing is very big as is a pitcher's concern with preventing base stealing. Lots of small ball. Moving the runner through sacrifices etc. Each runner is very precious so they try to maximize any time they get someone  on base. They also list walks where the list R, H, E; its listed as R, H, E, B.  Also "strike", "ball" and "out" are all the same in Korean as they are in English. The quality of play is a little inferior to American ball, at least in the game I saw. It’s pretty rare to see a missed throw to first in MLB. I’m knocking Korean ball. I’m just telling you what I saw at this game.

They have the 6th inning stretch instead of the 7th innings stretch. And it actually is a stretch. Baseball players from both teams get on the field and stretch, whereas the American connotation I believe derives from stretching and getting up for a bit because you’ve been eating nachos all day. Also, they do not sing "Take me out to the Ballgame." But they are always cheering and singing anyway, thanks to the help of their cheerleaders. Each team has cheerleaders. One of the night’s highlights was watching the Doosan Bear’s mascot do the "Gangnam Style" dance to the song especially because the stadium is in Gangnam (South of the Han River).

The biggest highlight and the strangest thing I saw was a guy in a Doosan Bears uniform wearing a mask from the movie Scream firing a T-shirt canon into the crowd.

First of all there were probably an equal amount of KIA Tigers fans as there were Doosan Bears fans. So this stadium was rocking.

They have sing-songy cheers and chants. What’s interesting is each side take turns. They only cheer and chant when their team is hitting. Mr. Park later explained that they want to stay quiet while their team is on defense so they can concentrate better. They also cheer and chant regardless of what is happening. Here is some background on the video clip below: it’s the 3rd inning, nobody is one base and there are no outs, also, these are the fans for the opposing team.

The crowd was also very easily excited. Routine plays and foul balls were met with heart abreath inhalations. There would be hits that were can of corn pop flys, but amongst that crowd there was a collective inhaltation (is it going to be a hit???? definitely not) followed by the sign when it predictably caught (awwwww). This would also happen for ground balls down the foul line that were never ever even in the field of play, it was foul the moment it left his bat, but still that: is it going to be a hit????; awwwww.

I learned the term for “bullshit,”: “Myle-doe-andooay!” which is actually just “this doesn’t make any sense.”

I later on moved to the Doosan Bears section.

At the end of the night I sat and drank soju and beer with some Koreans and chatted for a bit. My Korean stinks and most people’s English isn’t great, but with thos two pieces alcohol kind of helps fill in the cracks and makes for something that’s like effective(ish) communication. I made some Korean friends and even made plans to go to Busan together. They ended up being unable to, but we’re friends on facebook so we can try to meet another time.

I have since be to Changwon’s minor league team’s game which had a much less chaotic feel. (Check back in a week or two for that one)