I had my medical exam. A medical exam is required of any foreigener who wishes to get an Alien Residence Card (like a green card). The benefits of an alien card include: the ability to get a cell phone, bank account and to join the city bike share program. My boss, Mr. Park, picked me up, drove me to the hospital and accompanied me through my tests. In Mr. Park’s car, much like many Korean’s cars he has a GPS console that you can also watch live television on. He also told me about Korea driving. Koreans use their hazard lights all the time when they drive for all sorts of strange reasons: back-in parking, driving on the shoulder, etc... Mr. Park explained it to me, "Koreans use their hazard lights to say 'I’m sorry (but I’m about to do something dangerous).'”

Initially I was very surprised by the hospital, particularly the staff. In America, most hospital administrative positions are staffed by large, dumpy, frumpy fat women. At the hospital all the admins were beautiful little Korean women. Also people walk around with IVs a lot. I don't know what thats all about. 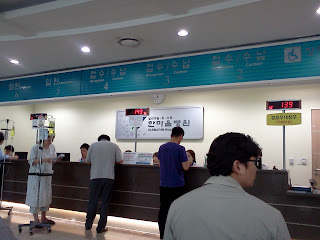 My medical exam featured many tests. They tested my blood, they tested my urine, they x-rayed my chest, they tested my sight, they tested my hearing, they weighed me, they examined my teeth, They had my fill out a questionnaire about family and personal medical history. One question was: Have you smoked 100 cigarettes?  (Me: Ever? Like totaled up? Mr. Park: I guess that’s what it says.)

I passed my test with flying colors. As an extra perk, Mr. Park treated me to lunch at McDonalds (y’know because I’m American). It was the first McDonalds I’d had in Korea and I got to say there was something unexpectedly comforting about that Quarter-Pounder with Cheese. 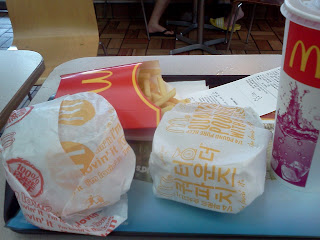 I thanked Mr. Park when he dropped me off at home and told him I’d see him at work in an hour.

After work I was invited by some foreigners to come out to dinner with them. We a Korean BBQ place where you cook your own meat places (there are tons of them in Changwon). They give you the meat, maybe about a dozen small sides and lettuce to wrap it in. Or is you prefer a sesame leaf. They give you garlic and they give you scissors to better cut the meat. That copper hose is a vent. You walk into the restaurant and every table has one above it. The foreigner community has made me feel entirely welcome. It’s a special thing to be here only 2 weeks and feel like I have some people to hang out with.


Supposedly Americans are biggest in numbers in the foreigner community although I feel like I’ve met more Brits and Australians.