Nubija is the city-run bike share program that is available to all of Changwon's citizens and foreigners holding an Alien Registration Card. All you need is a cell phone registered in your name and 20,000 Won (about $20) and you will be signed up with Nubija for an entire year. You can rent a bike for up to 2 hours before having to re-dock it at any of the 264 Nubija docking bays across the Changwon-Jinhae-Masan area (Jinhae and Masan are included in Nubija since they are incorporated Changwon city). If you keep it for more than 2 hours they call your phone.

I signed up with Nubija, even though I have my own bike, because I wanted to keep my bike in good condition for traveling. Nubija is also a little more comfortable to ride and can handle terrain better.

I'm a big fan of this system and the bikes. They have 7 gears. A lot of people complain that many are in poor working condition, but to find a high functioning bike are you have to do is a quick spot check of a few things (tires, brakes, seat) and you'll be fine.

Perhaps my favorite thing about Nubija is that people actually use it. Old people, young people, men and women, businessmen and children. The city actually uses them and embraces them. Changwon has an excellent biking infrastructure with bike lanes and bike corridors, which are sections of road sectioned off with a curb specifically to protect bikers. 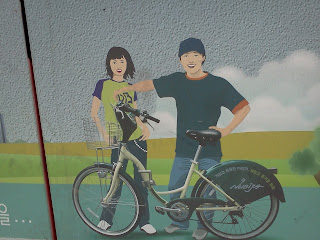 There is a definite pride Changwon takes in its bike system and infrastructure, and this can be seen all over the place in Changwon. Changwon seeks to be the greenest city in Korea by 2020.


Changwon is also home to a velodrome, a stadium with the sole purpose of housing bicycle races.

In the same stadium there is the Changwon Bicycle Culture Center. The have some memorabilia and some history about bicycles and biking. They also have a bronzed foot of Lance Armstrong that was made when he was here for the 2008 Tour de Korea.


The Nubija head office is where I went to sign up for Nubija. When I signed up they gave me a map, in English, of where the 264 stalls across the city were located. Below is a picture of the other city-bike share bikes from other cities in Korea. I forget the other ones but one was from Seoul (They aren't very common, or popular in Seoul though, in fact the only place I saw them was outside of the World Cup Stadium).


Right now happens to be bicycle awareness month. So outside the velodrome they have bicycle classes that you can practice riding your bike with other learners in a group.

Also, here are some pictures from my favorite bike shop in Changwon called Bicycle Mart. Its three stories high and home to some of the sexiest bikes I've seen in Korea. 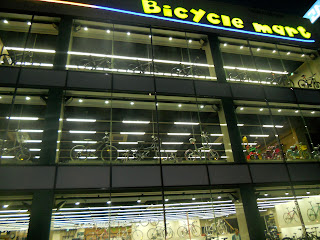 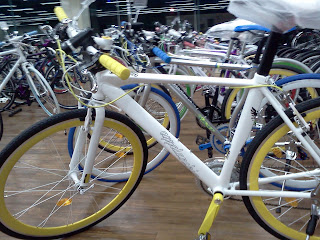 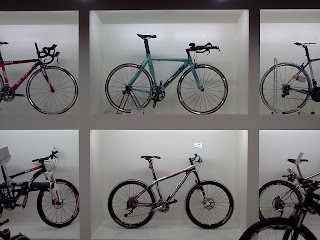