It's Chuseok vacation so I decide with my 5 days off I will go to Japan for the holiday for a quick vacation. Chuseok is Korea's harvest holiday, similar to our Thanksgiving. With the help of a co-worker I booked my reservation on the speed ferry that leaves from Busan, South Korea and arrives in Fukuoka, Japan. It cost about $280 round-trip after portage fees and took just under 3 hours.
I packed a traveler's backpack. My plan was to bring Gretta with me to bike around Japan. 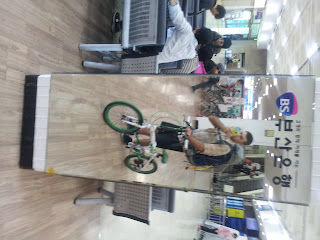 I quickly ran into a small hiccup. The boat told me a could not bring the bike on the boat if it was not in a bag or container of some kind. I found two boxes and made a ram-shamble enclosure for it. The staff taped up the boxes and deemed it acceptable. 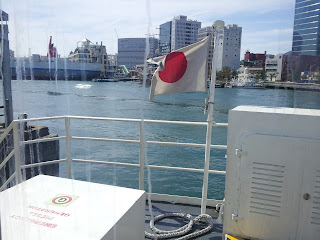 The speed ferry's speed felt something similar to a car. So it didn't feel particularly fast, but boats by nature are not typically fast. 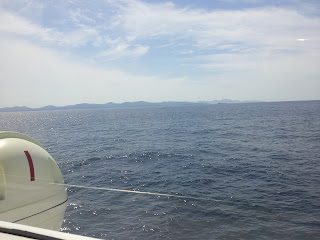 Right before we arrived in Fukuoka, I watched this new and unknown city slowly approach us. It was a city, like many cities I had visited, but it was completely unknown to me. The billboards were in an alien writing and only in my mind did I perceive that even skyscrapers looked "different." A strange new land in a strange new land was approaching. As we neared I was filled with a nervous and excited anxiety. It was the feeling of mystery, and the "unknown," which caused a knee-jerk reaction in the fear centers in my brain. But I was also filled with the fluttering and euphoric excitement of someone inspired by the possibilities of new discovery and wild, boundless adventure.


Right after I took this picture the man at customs said, "No pictures." Woops. 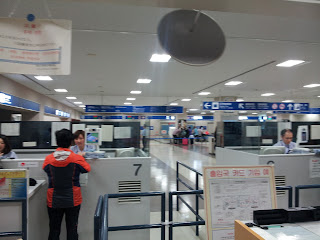 Right after I exited the ferry terminal, giddy with excitement I quickly bounded off on my bike. Not even bothering to take a map certainly had hurt me, because almost immediately I was lost. I was getting stressed, because although I had a 5 day vacation, I really only had 3.5 days due to the boat times I was able to reserve. So this was my half day and I became very frustrated because, being lost, I was wasting my time.

I was quickly rescued by some kind-hearted, well-meaning but unfortunately equally clueless New Zealanders. The Kiwis were a father and a tween daughter who were also biking.  He was half native-peoples and coached rugby. He was tall, athletic, had brown skin and a salt-and-pepper pony tail. He was also missing a tooth. We made chit-chat as we rode. I asked about their national rugby team, the All Blacks.  "Ah yis," he replied, "Gotta love the all bleks."I rode for them for maybe 20-30 minutes as they continued to not know where to go. Frustration set in and I eventually opted to break off and find my own way to Hakata Station. It still took a while. 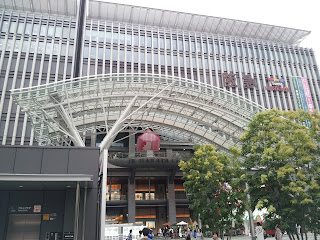 Hakata station is where the intercity and bullet trains leave from. It was where my hostel was near. The Hakata Station area was unfortunately a bit far away from the more happening Tenjin area. Lesson learned, sometimes paying a little more for a hostel thats in a better area is worth it.

But it wasn't all bad. I caught some music there. There was music all over the city all weekend. 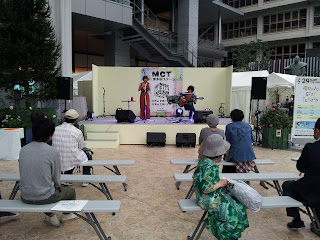 Then this was band called "The Kitchen Band," where they played kitchenware to a cheer sing-songy song. The were banging on pots and using knives on cutting boards. It was quite cute, 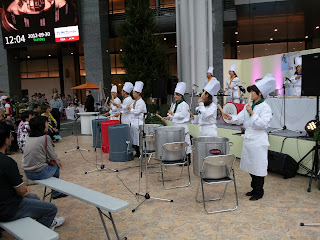 With the sun going down I was hell-bent on seeing something interesting and Japanese. I dropped my bag off at the hostel and cycled feverishly, looking for something, anything. I had been off the boat close to an hour and half to two hours at this point 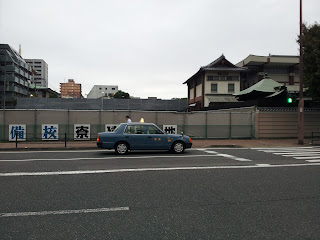 I found a small temple called Torinjin Temple. It had a small zen garden. Zen temples are derived from Buddhism and a different sect that evolved in Japan. This would be one of many Zen temples and gardens I would visit in Japan


Feeling calmer and more satisfied, I biked around Fukuoka until sundown. I then went back to the hostel to try to get my evening plans in order.