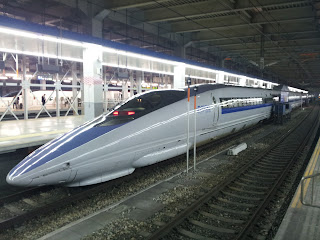 I had originally booked a consecutive 4 night stay in my hostel in Fukuoka. When I changed my plans, I set out to stay 2 nights in Fukuoka, a night in Hiroshima, and then my last night at the same hostel in Fukuoka. They were nice enough at the hostel to let me leave my large travel bag there.

So I left for the train station with my smaller travel bag and my fold-up bike. Excited to explore a new city.

I arrived at the train station with my bike and I am told I cannot take it on the train, even folded, UNLESS it is in a bag. The only way that you can take a bike on the train is if it is in a bag. Even a garbage bag won't do. I know because I tried. Very huffy, and frustrated at the point, I'm pretty livid about this situation because my travel plans were in jeopardy. I got some help from a station employee named Taka (and he admitted that the rule was stupid! Yes!). There was a store to buy bike bags in the shopping center of the train station. I bought a bag, spent like $60 bucks on it and I was off.

The reason for the bike bag is it is similar to taking your shoes off in a house. It's meant to keep the trains clean. For more info visit here. (a question I posted with responses)

Japanese speed trains are amazing. When they propel, you actually are pushed back in a seat a bit. They are spotless (of course) roomy, and are silent. They travel between 149 and 186 mph. 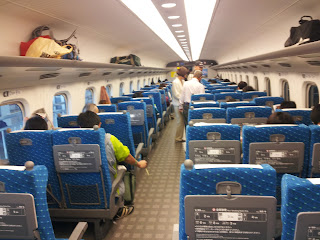 They have an indoor smoking closet. 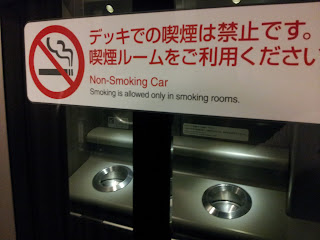 Their bathroom was quite astounding. The picture below shows 2 buttons next to the toilet. One is to flush the toilet. The other is to free you of the inconvenience of having to touch a toilet seat to lift it. It moves the seat up and down automatically. 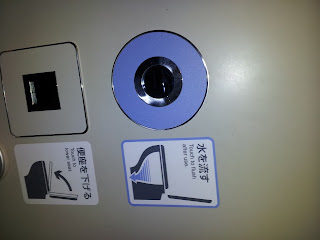 I enjoyed my time immensely on the bullet trains and goes without saying. The US, and Americans as a people, could learn something from this system.
Posted by Coby at 6:47 AM