I got back to Fukuoka that evening. I made loose plans to rejoin Rob and Michelle for a parting drink as we were all leaving Fukuoka early the next morning.

On my way from Hakata Station to my hostel, riding my bike, I saw to white backpackers riding folding bikes. Curious of their story, I raced them down. I then got with in shouting distance and stopped them.


Now I’ve spent a great time of self satisfying energy tooting my own horn about what a great idea having a folding bike was for my trip to Japan.. These two guys brought their folding bikes with them from CANADA to Japan. They were like me version 5.0! I had to get a picture.

I got back to the hostel at dark with a few hours to kill before meeting up with Rob and Michelle. Hungry for another meal of Tonkatsu Ramen I had set out to eat at the same place I went a few days ago.

I was about to leave, when two Italian college students on holiday, one blonde and one brunette, stopped in to the hostel. I figured I could use the company, so I asked them if they wanted to go out to dinner. I told them I knew a great Tonkatsu Ramen place. They asked if I could wait 10 or so minutes. I said sure.

Now these girls had attitude to boot. Pretty and European, my guess is, not many people said no to them. Anyways I should have seen a red flag.  The blonde says to the hostel purveyor, a Japanese guy, “Could you be my hero and make this call for me? The confirmation email they sent me is all in Japanese.” From where I’m standing, sure, that’s fair. Language help comes with the territory. After he helps her with that problem, she then says to him, “Could you be my hero one more time and carry our bags to our room.” My jaw literally dropped and I had to have the quick wherewithal to close it to hide my visible disgust. Keep in mind: this was a HOSTEL!!! But of course the smiling hostel purveyor grabbed the bags and hauled them upstairs.

The brunette asked if I could wait while they got ready. I said sure. About 20 minutes later, they come down stairs and I’m ready to take these people that I’m fairly certain I do not like, out to ramen. As I was walking them, I got a little turned around and realized I had been taking them the wrong way.

“Are you sure you know where you’re going?” snorted the blonde.
“Yes” I stated. “And you’re welcome.”

We get to Tonkotsu Ramen, the food is fantastic, but obviously the company is leaving a little to be desired. The blonde had an air of European arrogance being from Rome, the proclaimed “best city in the world.” (At this point I’ll note that the brunette was never particularly abhorrent but just kept lousy company). I grew tiresome of their company so after I finish my meal, I merely state that I need to go because of commitment I had made earlier (which was true). I scooted my money on the table and promptly left, feeling the true benefits of solo travel. If I don’t like something, who says I have to stick around for it?

I met up with Rob and Michelle at the agreed time at the ex-pat bar. I ordered a Japanese IPA which was the best IPA I’ve had since being in Asia (yes even better than Rogue’s IPA I had in Busan). We talked into the early night and each departed on the early side because of our morning departures. 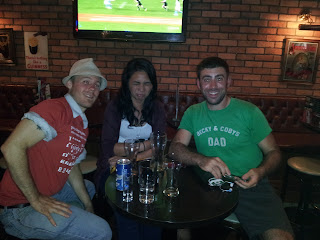 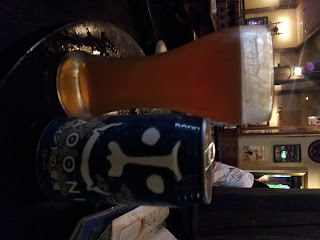 I rode early to the ferry terminal and watched sunrise over the ocean. 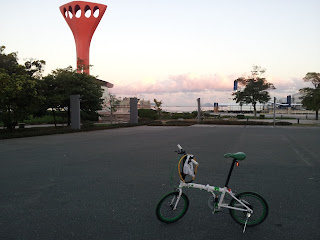 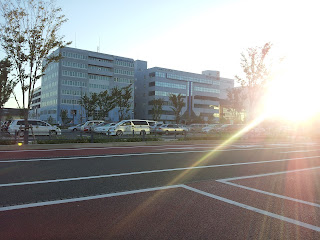 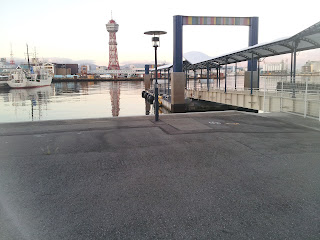 As I waited to board my boat there was a press event for the Japanese Coast Guard. It seemed like a fitting end to my time in Japan. 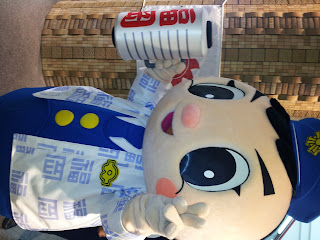 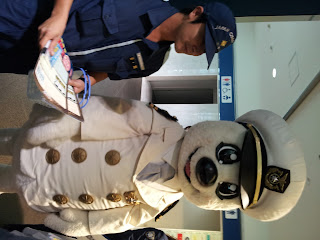 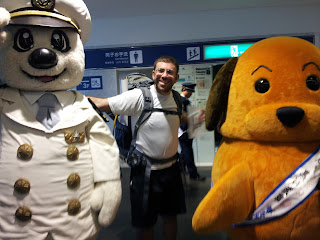 My final takeaways for Japan:

• The people are very nice. I had a wound that kept reopening and I nicked it and
it started spilling blood. A Japanese woman stopped at gave me some tissue.
• It’s first world Asia. They have cream for their coffee.
• It is very clean, as are their trains (thanks to bike bags)
• They are looking around when they walk and are aware of their surroundings. In contrast Koreans are not. In the US we have a silent conversation when we are walking on the street with an oncoming pedestrian. With eye contact we calculate a way for us not to run into each other. This doesn’t happen in Korea. People barrel through. Uncaring and unaware. They aren’t rude just unaware.

Bike bells: It took one ring of my bike bell in Japan from several yards away and people would turn, recognize me and move accordingly to avoid being hit. In Korea: good luck. I can ring my bell 30 times in succession and be directly behind someone and then when I finally speak, they will turn around, genuinely be surprised to see me (the person that has been ringing the bell consistently for the last 30 seconds) and then move. It’s a culture thing and I get that, but in Japan, it only took one ring.

• Japan is expensive but not as expensive as I thought. I had a budget of about $800 for travel (not including the boat), I came back with about $150 unspent.