Having a bike has made Changwon easier to explore, I set out to go on a hike, but never actually made it to the trailhead. Instead I sort of ended up on what looked to be a fairly vacant highway construction site. It was still pretty cool and offered some nice views of the city. I was misled because there appeared to be a parks office booth, and there were many families picnicking along the stream, but there was no park/hiking area to be found. 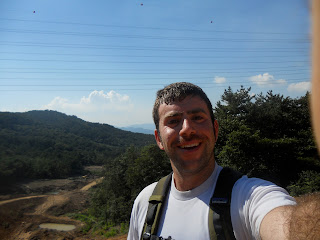 After that I rode past Changwon’s municipal rose garden. I went and checked to see if the cupid statute was Korean. Yep, he’s definitely Korean.

After cruising a little more I found a huge city skate park, that was apparently pretty good. I met a North Carolinian there who lives in Busan who specifically came to Changwon that day for this skate park. As it turns out this skate park is really close to my work.

Also right near the skate park there is a small hiking area so I did end my day eventually hiking in some woods.