SEOUL VACATION - GETTING AROUND & HAN RIVER

SEOUL VACATION - GETTING AROUND & HAN RIVER

I must have put on at least 40 miles biking around Seoul. On my first day I biked the Hongjecheon Stream up to the World Cup Soccer stadium. I then rode along the Han River for a bit and saw the sunset on the Han River. 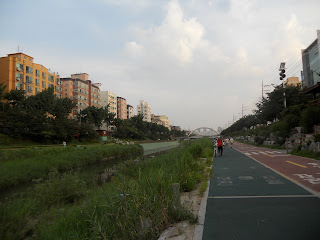 The Han River is the river that splits Seoul in half, the north part from the part. The southern part is a little newer and more affluent and features Coex shopping center, Lotte World (an amusement park), the Olympic stadium and park and Seoul’s tallest building the 63-story building aptly named 63City (known by my Hagwon students as the most disappointing field trip ever: You just get to the top and that’s it!). 63City had to be built outside of the downtown area, because there are regulations about the height of buildings in the main downtown area presumably having to do with a possible wartime emergency. Also south of the river is known as Gangnam (South of the River) as in Psy’s summer smash song: “Gangnam Style.”  If you haven’t seen this video, treat yourself. It’s the summer smash hit that is everywhere here- hilarious video!

I biked all along the Han and biked past Seoul’s many bridges. The Han River has an excellent bike system with convenience stores that follow the bike paths, several geriatric work out stations and lots of bathrooms (on the bathroom picture that is Haechi, Seoul’s historical mythical winged lion creature mascot given a 21st Century Super Mario Brothers revamp.) From the Olympic Stadium to where I was staying in Hongdae it was roughly 20 miles (I learned the hard way). 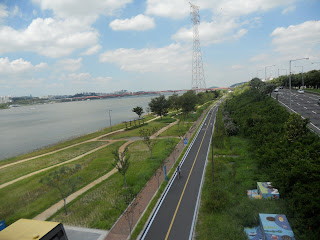 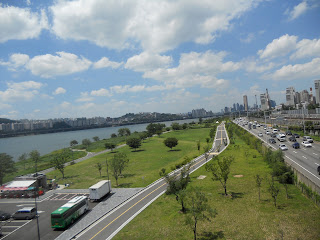 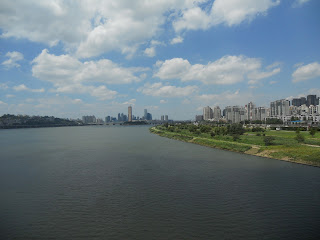 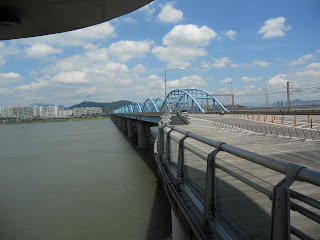 Aside from my first follies with the subway system, once I got a map it was smooth sailings. The subway is easy to get around, it’s cheap and mostly in English. It goes everywhere and the folding bike worked perfectly. And you get 500 Won (about 50 cents) when you put the card in a machine after you're done with it so it can be reused. Some interesting information: some subway stations have these cases full of gas masks ready to use for the public in case of some kind of attack. They run videos of how and when to use them in the HD TVs on the subway, featuring actors running away from a suitcase that is post-productionally smogging.

Also at some of the subway stations they have underground art galleries for people to enjoy.

All in all though the subways are fantastic and easy to use and get around on.
Posted by Coby at 5:26 PM