Seoul is a rapidly expanding 21st century metropolis. Home to modern architecture, it is a city that is culturally connected to the rest of the ever globalizing world.

I took an unofficial architecture bike tour through Seoul.

This is a statue of King Sejong in the main square He is also known locally as Sejong the Great.

Here is what Wikipedia says about King Sejong:

“Sejong the Great (May 15, 1397 – April 8, 1450, r. 1418–1450) was the fourth king of the Joseon Dynasty of Korea. During his reign, he reinforced Korean Confucian policies and executed major legal amendments (공법; 貢法). He also used the creation of Hangul (the Korean alphabet) and the advancement of technology to expand his territory.”

He is said to have created a sundial and a water clock.
Basically he was Korea’s King David.

Also in this main square, it’s kind of like Paris' Champs Elysees, you have some fountains, the nearby American embassy, where there are many guards constantly roaming, and it is also home to their newly remodeled city hall. There is an expansive addition that has been added behind the original city hall building reusing the past building and creating a 21st century addition behind it.

There were lots of kids running around in the fountain because it was like 100 degrees and very humid. This is still along the main square akin to the Champs Elysees. 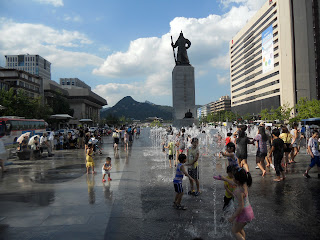 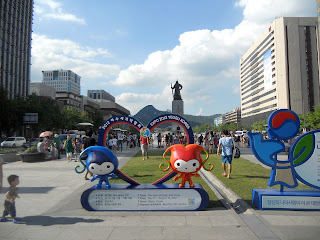 I got hungry doing all this site seeing so I stopped in for a burrito. Not an easy thing to come by in Korea.

Along the Han River there are these manmade islands simply called The Floating Islands. They are viewed as pointless by the locals because the remain not in public use for most of the year. The Floating Islands are used for conferences, expos, special performances, weddings and etc.


After my little biking tour I set off to go to the Doosan Bears baseball game...
Posted by Coby at 4:39 AM