My mother is an ESL teacher in the United States and also teaches private lessons. On of the students she tutors, a high schooler named Sung Chol, lives in and goes to school in the United States. His dad still lives in Korea. Sung Chol came back to Korea over summer break and has been living in Seoul with his dad over the summer.

I was lucky enough to have this connection, so Sung Chol and Sun Chol’s father CJ took me out to a fantastic lunch and took me around Seoul. 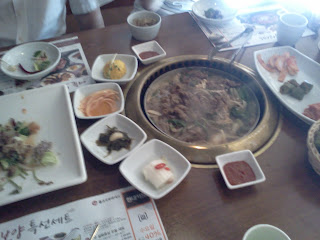 After lunch we went to CJ’s office. His office is located in like the Madison Avenue of Seoul. Right downtown and the views of Seoul from the office, the pictures speak for themselves. Also when I say its CJ’s office, its not that he works there. It’s his office. So we went up to his office and I enjoy an ice cold Coke as well as the incredible views. 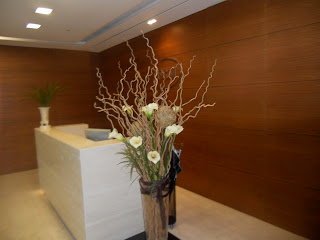 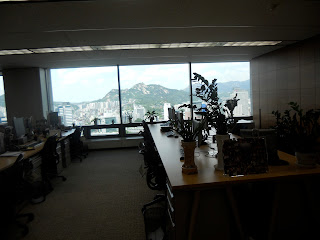 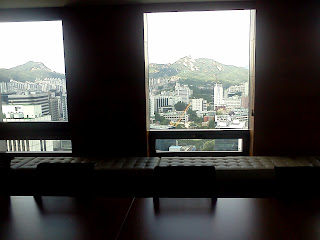 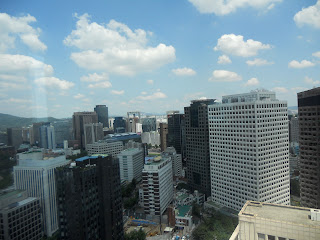 After the office we went to NSeoul Tower. We took the cable care to the top of the mountain then went to the Tower where you can see ALL of Seoul. 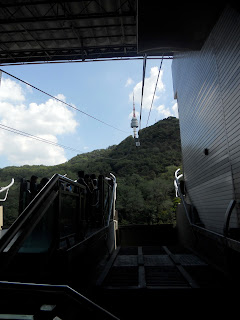 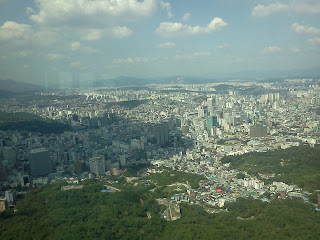 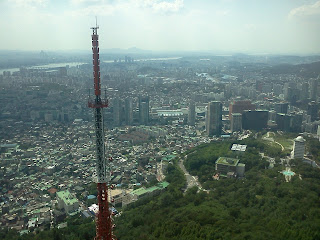 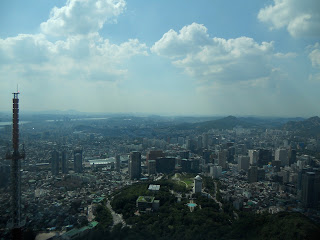 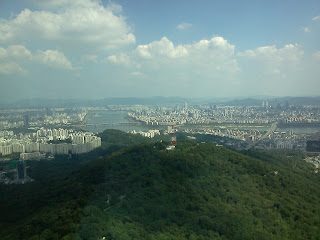 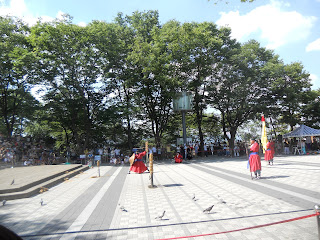 He dropped me back at the hostel where I prepared for my last night in Seoul. I met up with some folks from the hostel at bar that had a small pool. In 100˚ weather it was very refreshing. 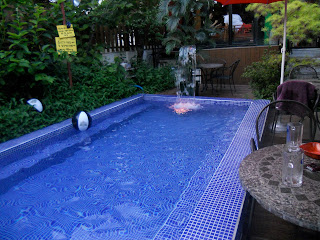 The people I met at the hostel were very friendly and from a variety of mixed backgrounds but every meshed well together. There was Carolien who was the 6 foot Dutch blonde girl I went clubbing with, there was Juno from Australia, MK the hostel purveyor and Van, a Vietnamese American from LA and a captain in the US Army stationed in Korea.

We went out to dinner.

We later went to a few different kind of quieter bars where we did a lot of just great chit chatting and some very good “getting to know you” conversation. There’s a palatable magic that comes with being with other travelers in the way that you connect with people. You find yourself sharing things about yourself and connecting in a way that is very different than with people you meet and interact with in your day to day.

We played some drinking games at some quieter bars. Nobody really got drunk, but it was just very pleasant, and without trying to sound too sappy, pretty bonding. One of the bars probably had over a thousand vinyl records and the bartender/DJ took requests. I requested Toots and the Maytals “Monkey Man” and Bruce Springsteen’s “Reason to Believe.” Our group also got down with some Elton John for a bit. 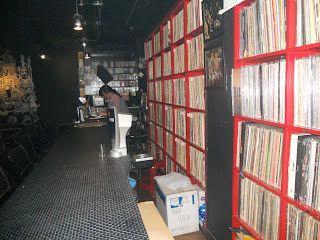 One of the bars had a view of the streets of Hongdae. 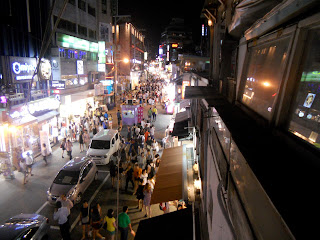 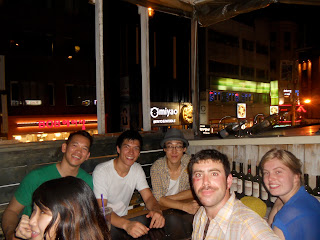 All of a sudden we see a parade go through Hongdae of maybe 2 dozen people pounding on drums. It was like a Afro-Brazillian drum group (of Koreans) all playing and dancing in the streets with giant puppets following them. They all had funky hair and clothes. Saw some dreadlocks in there. It was a very special end to my time in Seoul. 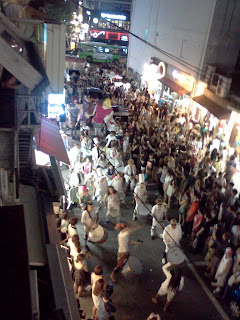 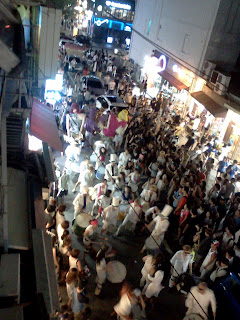 I took the bus back to Changwon the next morning.

Oh yeah, also I saw this passed out guy in Hongdae. A not uncommon site in Korea because people get very wasted. A very big alcohol culture here. Soju, their rice wine similar to sake, Moekgili, which is a rice beer and is cloudy white, and Korean beer are the spirits of choice. For more entertainment of this variety visit Blacked out in Korea. 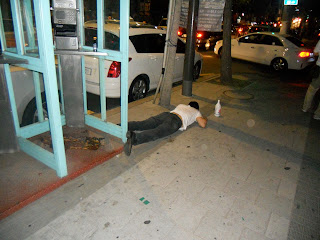