I tried suhn ji (congealed beef blood soup) for the first time on a Saturday night at like 3AM from essentially a food truck. I didn't know the brown meat in the soup was congealed beef blood. I assumed it was tongue. It was brown, porous and crumbled easily. With the soup and everything with it, all in all not bad. I've actually ordered it since.

I tried the very popular desert called potbingsu. Its a bowl of shaved ice and red beans and a sweet sticky mochi-like ricecake. (no dairy) Then you mix it all together. I think you would like it. You heard it here first- this is going to overtake Pinkberry as the go-to thing. When this comes to America people are gonna freak out over it and overcharge the crap out of it. (Note: Just found out they have this in NYC and DC)

This is hae chjawhn gku. This is a breakfast food. The picture was taken at breakfast time. Hae chjawn gku is a fish based soup and is commonly referred to as hangover soup. It was good. That big bowl of rice is for adding to the soup to thicken it up. Other soups and other places they sometimes give you a raw egg that you crack in the near-boiling soup they give you to thicken it up too.

These are "ice noodles" its a cold soup and literally has crushed ice floating in it. I wasn't a fan don't like cold soups.

And lastly. The only food that I have spit out in Korea: beondegi, which are steamed silkworm pupae. I thought they would be crunchy.They weren't. They were squishy and it was disgusting. 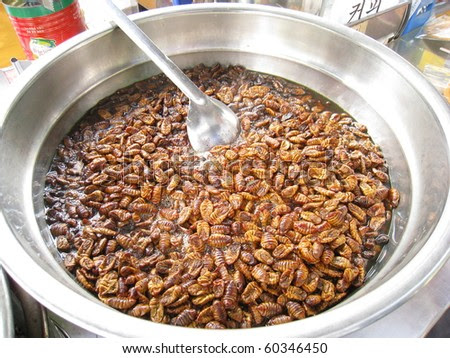