Jimjilbang is a Korean spa and public bathhouse. There are two sections to a jimjilbang. There is the communal coed section and then there are the sections that are separated by gender in which you are fully nude sitting in hot tubs and saunas with other fully nude people of your gender.

In the coed section, its a heated room, and they give you these sort of pajamas that you wear and people just sort of hang out, watch TV, surf the web, chat or even nap. Jimjilbang is a cheap solution to a motel if you're short on cash and just need a few hours of shuteye. They are open all night and usually cost about 5,000 to 10,000 ($5- $10). It's a fairly common practice. Although I have a funny story that I heard from a friend who stayed the night in a jimjilbang in Itaewon (referenced here; again home to "homo hill" and "hooker hill) that is not quite for all audiences. If you want to hear it, let me know and I'll email it to you.

From here on out I can only speak to my experiences at the one time I've gone to jimjilbang. It made it easier that I was with Koreans (who knew what they were doing) so I just kind of followed suit.

When you walk into the lobby there are rows and rows of lockers just for your shoes. You put your shoes away before you go anywhere and they give you a little key. By the way, this jimjilbang I think was particularly nice. 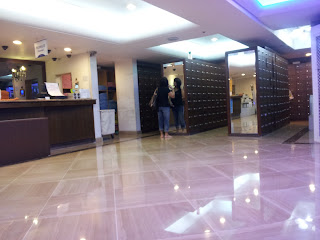 I did not do the common area thing, I went straight to the gender separated public bath part. First off when you get in, yes, you are seeing naked people. Naked males of all ages including children, old people, everybody, and its just one of those things that you got to get over quick.  The men's section was not just hot tubs and saunas. They had a barber shop section where you can get a (clothed) hair cut and a shave. There was also a little convenience store place where a clothed shopkeeper could sell you (clothing optional) things like a candy bar or a Coke. So I watched these naked guys walking around, standing in line, and buying things from this little store (Lord only knows where they kept their money...).

Anyways there's the locker room area, you undress and then you walk freely in the buff to the various pools, showers, saunas, feet scrubbing stations and balconies that the jimjilbang has to offer. Supposedly the different pools, depending on the temperature, and or the wood or oils used, hold different medicinal properties for healing different ailments.

So I sat in a few different pools. The hottest one I sat in was 111 degrees (I didn't sit long). I went out on the balcony to enjoy the view. I didn't go into any saunas. Some jimjilbangs, not this one, had a cold room that's like the opposite of a sauna. I also did not feel like I was attracting a lot of attention which I felt relieved about, not only for being white, but for being particularly hairy (most Koreans do have much body hair). But either they were forcibly not looking, or they just didn't care, either way, I'll take it.